Urban dictionary shows the word ‘stagey’ is used to describe all things excessively theatrical, including the people. Stagey people are almost a species of their own, you can tell one from almost a mile off (most of the time you will hear them first) – but we wouldn’t have it any other way.

1. We Like To Tap Dance – No matter how good or poor our level of tap is, we will occasionally be overcome with an overwhelming urge to perform a little rhythmic step and maybe a few time steps, for no apparent reason. Suddenly, we all become Gene Kelly.

2. Sing All Day, E’ry Day – Singing is not confined to the studio, no no. We stageys belt proudly in corridors, buses, the streets and, pretty much anywhere – taking note of the ‘sing like no one is listening’ phrase. The more people that notice, the better. 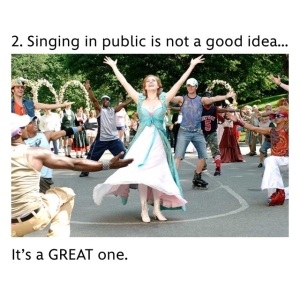 3. The Glamorous Bend and Snap – Why bend your knees to pick items up off the floor when your hamstrings are so loose that you can perform a fabulous forward port de bras?

4. Find Unusual Places or Objects To Stretch On – Stagey folk spend most of their life feeling achey and stiff due to the previous days strenuous activity, therefor, there are plenty of convenient places we find so we can stretch on the go, for example, escalators!

5. Fantasise Over Sportswear And Trainers – Most of the time, we are either in sports/dance wear and trainers or pyjamas and slippers so, since this is all people will ever see us in, we may as well look our best in it.

6. Have A Never Ending Love For Dance Moms – while normal people are shocked at the way these poor children are treated on this TV show, stagey people spend their time highly envious and secretly cursing the fact that their teacher wasn’t like that as a child, because if they were, by now they’d be shit hot.

7. Harmonise To Happy Birthday – the PERFECT opportunity to show off your skills when it’s someones birthday, and as if by magic the low and high harmonies are performed without any previous discussion of doing any such thing – people just know.

8. Go To The Theatre More Than The Cinema – We feel shame and withdrawal symptoms if we don’t attend at least once a month – we need our stagey fix.

9. A New Meaning To The Word ‘Yes’ – Instead of yes being an affirmative answer to a question, yes is used to show appreciation of someone else’s talent and skills – it can be pronounced in several deferent ways including ‘YAAASSSS’ or ‘YESSSSSS’ in a high belt.

10. Mark Out Routines On Public Transport – When listening to music on the train or bus, it is the perfect time to go over routines!

11. Ridicule Live Celebrity Performances – The talent of many pop stars (with a few exceptions, namely Beyonce) does even come close to matching the skills of many west end and broadway stars who are often lesser or unknown – and it is a sham! Live performances often reiterates this.

12. Eat Healthily – Or not. To the world we pretend that that we love to be healthy and eat clean to keep up with our athletic career, when really, the struggle is REAL. We probably eat far worse than most and just hope that we will dance it off later. 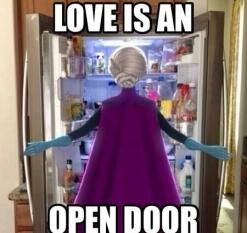 13. Follow one simple rule… Take EVERY opportunity to be STAGEY – Whether it be making a piss take musical video in your free time or tilting every time a camera is pointed in your direction, ALWAYS be stagey and most importantly, be FABULOUS.

– For examples of this, simply search hashtag stagey on Insta – then you’ll get the gist!

7 thoughts on “13 Things Stagey People Do, That Normal People Don’t”

Join 1,621 other followers
Follow Daisies At Dawn on WordPress.com